BS VI standards that are coming up in 2020 were a big topic of discussion at SIAT 2017 especially in light of the fact that India has the 30 of the top 100 most polluted cities in the world, according to the World Health Organization. There is some distant hope that perhaps a direct leap to affordable electric vehicles could help India as it shifts to significantly stricter emissions standards, with one businessman hoping to donate up to one million zero-emission electric vehicles to drivers as a way to help reduce the country’s air pollution. However, other industry levers also need to be in play in order to make the leap.
The planned dramatic jump from the existing Bharat Stage (BS) IV air standards to BS VI by 2020 — skipping entirely the intermediate BS V standards — will require fuel and vehicle producers to both take steps to help compliance, with oil producers having to invest in new technologies to further reduce the sulfur content in fuel. Reducing fuel sulfur levels helps to cut emissions because vehicles emit less harmful emissions with the lower-sulfur fuel.
But perhaps the biggest focus on the tightening standards will be on how automakers respond, whether through developing indigenous affordable innovative technology to reduce cars’ emissions or by adopting European technology, which is too expensive for the Indian market.

What are BS IV and BS VI?

The existing BS IV standards introduced in 2016 set limits on various pollutants from petrol or gasoline, including a 1 gram per kilometer (g/km) standard for CO, a 0.10 g/km limit for hydrocarbons (HC), and a 0.08 limit on NOx. For diesel, the limits are 0.50 g/km for CO and 0.30 for HC and NOx combined.
The current diesel standards also set a 0.025 g/km limit on particulate matter (PM). Older diesel engines and vehicles remain some of the largest sources of PM emissions.
Shifting to the BS VI standards for petrol will retain the existing 1 g/km CO limit and the 0.10 g/km HC limit, but tighten the NOx standard to 0.06 g/km and introduce a PM limit of 0.0045 g/km.
For diesel, the change to BS VI will not affect the 0.50 g/km CO limit but it will tighten the NOx limit to 0.08 g/km and reduce the combined HC and NOx standard to 0.17, while relaxing the PM limit to 0.0045 g/km.

Because the standards require less emissions from vehicles, automakers will have to take additional steps to reduce their vehicles’ emissions, with a range of possible options available . For example, they might have to redesign the shape of their cars in order to make them lighter and more fuel-efficient, which will create new research and development costs that will likely be passed on to consumers through higher car purchase prices.
Indian cars already use a very small engine, the majority using 1 – 1.4 liter engine, so other avenues need to be explored for pollution reduction. A typical Indian car costs around $11,000 US Dollars. The cost of hybrids or fully electric vehicles would be a huge jump. IAV, Tata and other OEMs talked about developing customized low-cost powertrains for the Indian market that would meet these new standards. Additionally, cars will need to be fitted with diesel particulate filters in order to help attain the PM standards, and development of these and other emissions filtration will take time and money.
Selective catalytic reduction (SCR) is an option for helping reduce NOx emissions in order to meet the stricter requirements of BS VI, but similarly building better-working SCR is a potentially costly step to take. And the tight timeline for implementing the standards means research must happen quickly.

One alternative to re-engineering vehicles to make them more fuel-efficient and lower-emitting is to instead focus on promoting electric vehicles which can have low or zero direct emissions.
The Economic Times reports that Masayoshi Son, one of the co-founders of the investment group Softbank, Japans 2nd richest man, according to Forbes, is offering to give away up to one million electric cars made in India. According to the Times, Son said that this proposal could not only help cut air pollution but also bolster efforts to promote Indian manufacturing. Son is a major investor in the Indian transportation sector already, being a major investor in Ola Cabs, an Uber-like ride service, but with 450,000 vehicles in India to Uber’s 250,000 strong Indian fleet.

A major hurdle to increasing use of electric vehicles is a lack of electric charging stations infrastructure across India, but the pressure of meeting the BS VI standards could compel new investment in such stations. That could potentially signal to the market on the demand for electric cars, and boost Son’s plan to promote the vehicles.

Why or Why Not? 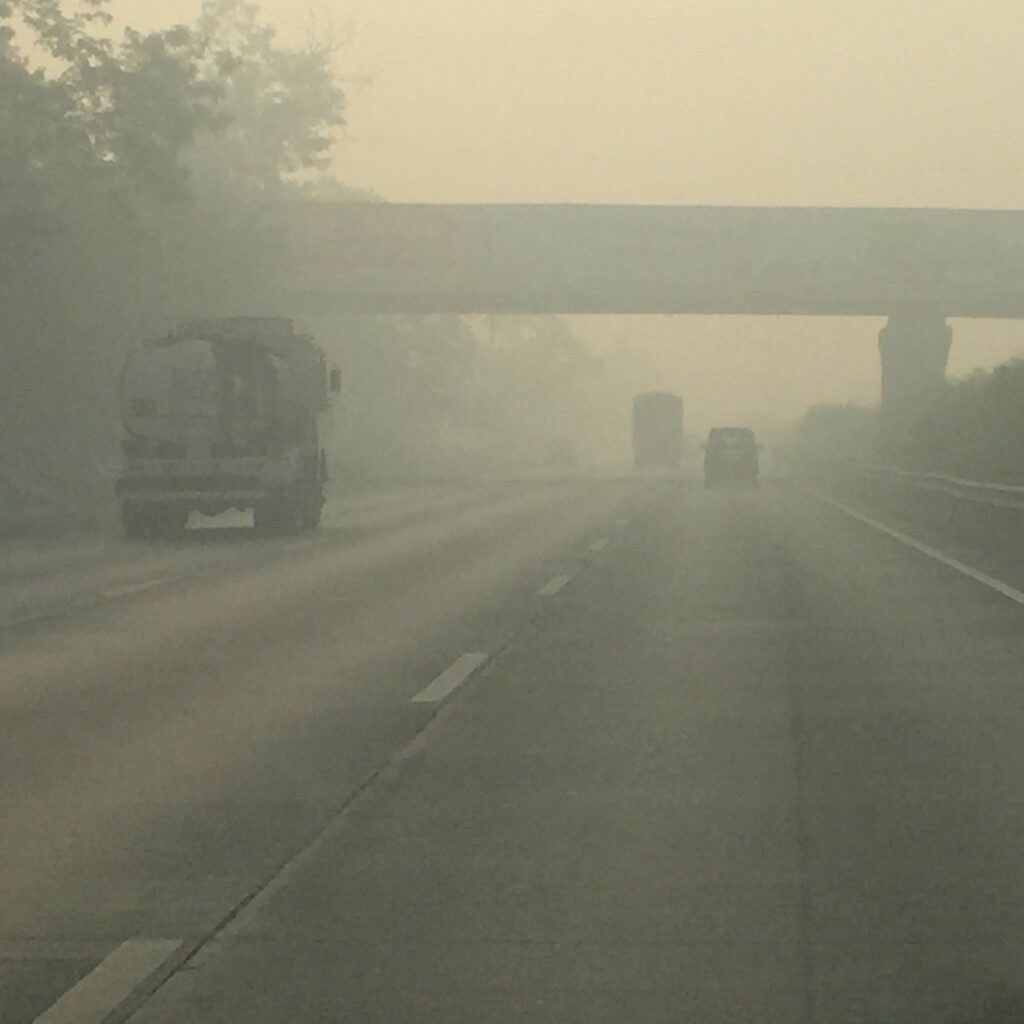 Photo taken by author travelling from Mumbai airport to Pune

For the “why” of new emissions standards see this photo of regular Pune pollution that I took this January while traveling to SIAT. Aside from road pollution, diesel fueled stationary power generation and industrial smoke all contribute to this pernicious fog. All I have to do is call up someone in India to hear the human costs of pollution. Hacking coughs are a normal factor of life.

People here in the US, and in other developed countries, are astounded to see the environmental effects of the current situation. India has a long way to go to fully electric vehicle infrastructure or even a fully electrified population. With constant brown-outs and black-outs the Indian electricity situation is far from stable and has ever increasing demand, electric cars could tip the system over. Only a stable grid, and new sources of energy, can solve the crisis along with electric vehicles. None of this can happen in isolation.

However, a country like India also has the best chance of succeeding in leap-frogging old technology, much as they did with mobile phones. One thing is for sure, India will either pay for the hard costs of implementing pollution regulations or will continue to pay the environmental and human costs.