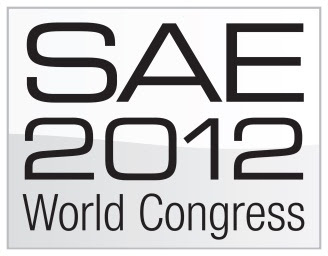 I presented at the 2012 SAE World Congress on transient modeling of powertrain components1.  While at Cobo Hall, I also attended and reviewed other papers on Engine Thermal Management and Overall Vehicle performance simulation.  Among many papers and committees I attended, below are three papers which I thought were awesome. Awesome, either because they had surprising counterintuitive conclusions or quantified certain phenomena on today’s engines which others can reference. In this blog, I share my notes on Engine Thermal Management.

I start with a paper2 by Paul Shayler et al, “Luff, D., Law, T., Shayler, P. and Pegg, I., “The Effect of Piston Cooling Jets on Diesel Engine Piston Temperatures, Emissions and Fuel Consumption,” SAE Int. J. Engines 5(3):2012, doi:10.4271/2012-01-1212.” The surprising conclusion of this paper is captured in this quote “The increase in oil pump parasitic losses offsets the improvements in gross fuel conversion efficiency associated with higher piston temperatures.” WOW! The pump power went up by SO MUCH that it nearly wiped out all fuel economy gains! He did go on to say that if the pump was replaced with a vane pump, the added frictional losses could be recuperated. It is studies like these are commonly performed at various OEMs as they look to squeeze out fuel economy performance out of the same engine. 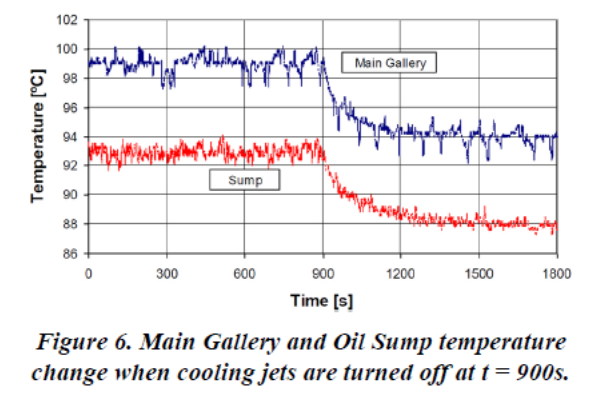 The paper also quantified the oil temperature change (for that engine atleast) when the piston jets were turned off. A graph from this paper shows this. “With the jets switched off, piston temperatures were measured to be between 23 and 88°C higher. Across a range of speed-load points, switching off the jets increased engine-out emissions of NOx typically by 3%, and reduced emissions of CO by 5-10%.”

The second paper was on differences between steady-state and transient engine characteristics for a diesel engine3 by Glewen et al. Glewen, W., Heuwetter, D., Foster, D., Andrie, M. et al., “Analysis of Deviations from Steady State Performance During Transient Operation of a Light Duty Diesel Engine,” SAE Technical Paper 2012-01-1067, 2012, doi:10.4271/2012-01-1067.  The important conclusion from this paper is that the steady-state data on the engine is NOT a reliable indicator of transient performance, especially in high load changing cases.

In various OEMs today, a good portion of the engine calibration and research is done under steady-state conditions and this steady-state data is used to provide guidance on transient performance. This study saw large variations in transient and steady-state behavior especially under high load transitions. It is worth keeping this in mind while calibrating the predictive models.  But all hope is not lost. Not by a long shot.  I personally have used steady-state performance data (such as engine heat rejection data) to predict transient behavior reasonably well. So, I know for a fact that steady-state data can be used to predict most transient behavior for commonly used drive cycles. The variations that were measured in the paper were on emissions, and that is directly linked with the combustion phenomena and the heat generated in the engine.

The paper discusses co-simulation of multiple software packages (some of them COTS) for full vehicle system performance calculations and presents a clever way of co-simulation (run programs parallely as much as you can) to save time (~25% of computation time saved). That in itself was not as interesting to me as were all the graphs in the paper comparing simulation data with experimental data. It provided me with an insight of perhaps where their (GM?) current tools stood today in accurately predicting various vehicle parameters – such as brake torque, engine speed etc. My conclusion from these correlations was that GM is where rest of the industry is in simulation accuracy. Lot of improvements still need to be made before it can be really used as predictive tool.

A final note. About 5 years ago at the SAE World Congress, most papers were either on fuel cells or hybrid powertrain as if we had abandoned the traditional powertrain. But people forget that more than 95% of today’s powertrains are “traditional” powertrains which still have plenty of challenges to work out. I was glad to see the papers come back to traditional powertrain, reflecting reality and the daily activities at our research centers.

So, there you have it. My notes in case you didn’t attend SAE World Congress and are in the Engine Thermal Management space.