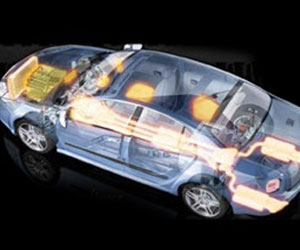 This is a late blog post. I attended and presented at the 2012 Thermal Management Systems Symposium in Scottsdale, AZ on Oct 31st and Nov 1st. It focused on the latest and most pertinent topics in the field of thermal systems technology today. These are my notes on three notable presentations (and my take always), specifically in engine thermal management and related fuel economy benefits.

It is interesting to note before I start that I saw a lot of commonality among car manufacturers in the technologies they were exploring for fuel economy improvements, generally combining many of strategies together to improve the fuel economy performance.

The first presentation that I have copious notes written for was a presentation by BorgWarner on fuel economy improvement during engine warm-up. They talked about the use of a dual mode pump (electric and mechanical) which can reduce the parasitic loads and frictional losses of the engine. They presented a clever implementation of shutting off the coolant pump during the first few minutes of start-up, combined with running it on an electric mode when lighter work load was needed. They presented a case where the frictional losses were reduced by 2.9%. They showed a cold FTP 75 cycle fuel economy improvement of 1.13% and a cold NEDC fuel economy improvement of 1.9%.  This is a space I would watch closely to see how much of this is materialized in the coming year(s).

The second presentation with excellent technical content was a paper from KIT –  Karlsruhe Institute of Technology, They dedicated a paper specifically on engine frictional losses during warm-up – “A Method for Building up an Engine Friction Model – Assembly-based and Valid for Hot and Cold Conditions”. They systematically took apart an engine, one loss at a time (the accessories, crankshaft, pistons, valvetrain etc) and measured their individual contribution to the engine friction as the engine warmed up from a very cold temperature. This gave them an extremely high fidelity and understanding on the engine friction losses. They compared their measured frictional losses with predicted numbers from commonly accepted mathematical models. My take away here was how the commonly accepted mathematical models today for friction prediction fall apart at predicting the engine frictional losses at low temperatures (<20 C). This deviation was quantified but perhaps valid for just that engine. This was a lot of work (atleast 2 PhDs were present), and again, I would watch this space in hope that perhaps an improved engine friction prediction mathematical model can be derived from it.

Reducing the size of cooling circuits

The third paper of interest was a paper from Valeo (Dr. Azzouz) on the use of phase change materials (PCM) to reduce the size of low temperature cooling circuits. The premise here was that today’s cooling systems are generally designed for “excessive heat loads”, and hence are oversized for most driving modes. The idea is to use an accumulator filled with PCM (with exceptional high heat capacity, order of magnitude higher!) in series with the radiator that can store excessive heat generated during extreme operating condition and dissipate it during periods of low heat. The bottom-line impact was a radiator downsized by 20-30%, a volume savings of about 21% and weight savings of about 14%.